Why some gas barbecues have lava rocks

Most modern gas barbecues now have heating plates but many older varieties still use a charcoal replacement such as lava rocks.

One of the issues with gas barbecues from the very beginning was how you got that smoky taste and smell that traditional charcoal methods delivered. One way round this in the early days was to introduce lava rocks which could lie on top of the burners in a grate and produce a similar, smoky effect.

What Are Lava Rocks?

They derive from the magma flow you find in volcanos and are readily available from any barbecue store.

Lava rocks are lightweight and porous which make them ideal for barbecues. The small holes in the surface of each rock mean they easily retain the heat from gas burners. They also help spread this heat more evenly and many barbecue enthusiasts swear they deliver a much better flavour akin to traditional charcoal.

One issue that has come to light in recent times is that ‘smoking’ fat has some health risks. Because of this, you should ensure that you change your lava rocks on a regular basis.

Having said that, many advocates are willing to take the risk to get their authentic barbecue experience. If you want the more authentic barbecue taste when you cook, and stay safe, you just need to make sure the rocks are cleaned, first by raising the heat to burn off excess fat and then, once they are cool, scrubbing with something like a wire brush to remove the fat that can congregate in the pores. You should look to replace your rocks every summer.

Note: You should never soak lava rock in any solution to clean them as they will tend to absorb the liquid and could crack or crumble when put on the grill again.

Want Lava Rocks? What Are the Options?

There aren’t many new gas barbecues nowadays that use lava rocks and those few that are on the market tend to be expensive. Your options therefore are to buy a second hand one or try to convert your existing gas barbecue. The first is probably the easiest option and you can pick up plenty of good deals online. The second requires you to fit a mesh or wire tray over your burners that can hold the lava rocks – the problem with this is that it will almost definitely void any warranty that you have.

If this doesn’t bother you and you are thinking of converting your new barbecue, you will first have to remove the heating plate that it came with. You can sometimes find premade grates online which can then be fitted in its place. You should ensure that you have at least 3 inches of space between the lava rocks and your cooking grill to get the best effect. You can then put the lava rocks in, making sure that they are evenly spread but touching, though not piled one upon the other.

The good news is that most barbecue stores and DIY outlets still sell lava rocks because many people have barbecues that use them. You should be expecting to pay between £10 and £20 for about 3 kilograms of rocks. If you like your meat to have the authentic smoky taste, it’s a good option to go for. 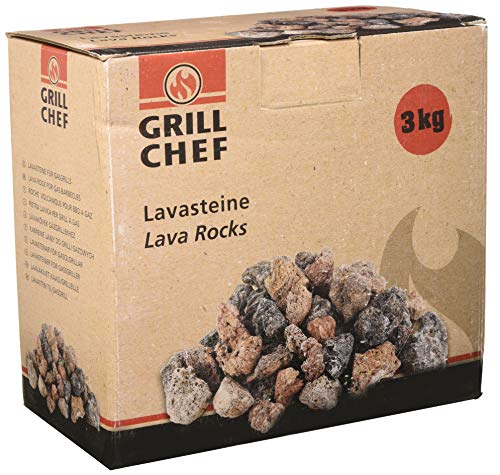